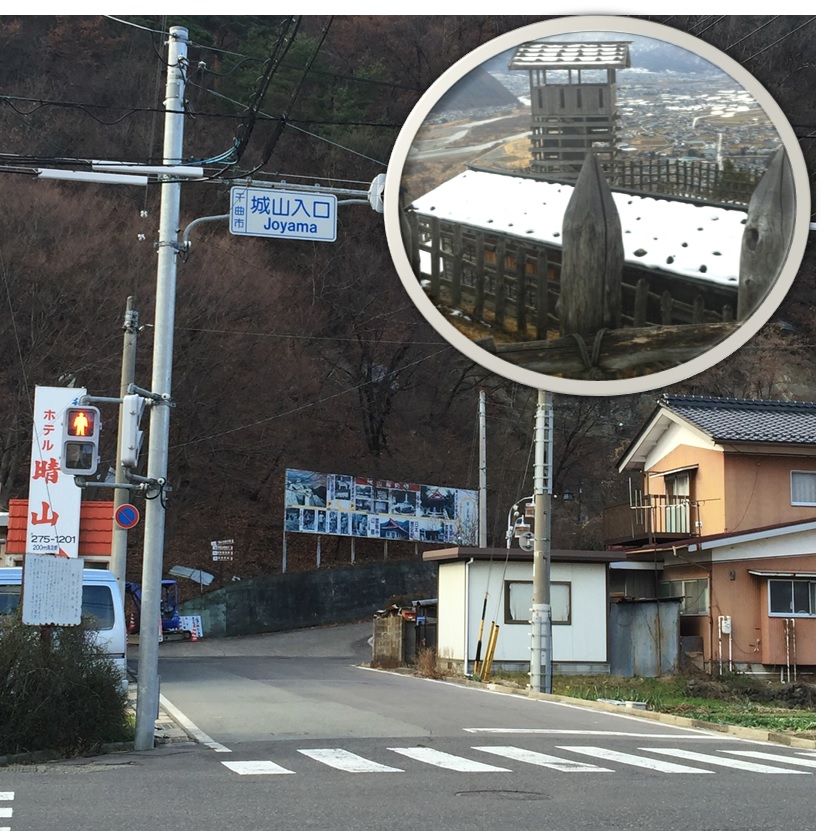 Stop #6 is the intersection of Manyo Dori, the street that crosses the Chikuma River over the Manyo Bridge, and Joyama Dori, the road at the base of Joyama Mountain. ‘Jo’ is one of the readings for the kanji that means castle, and at the top of Joyama is a fortress called Arato-jo. Most of Japan’s castles are like the one in nearby Matsumoto. Located in the middle of the city, Matsumoto-jo was built so as to be able to be seen from anywhere in the city, a symbol of the influence of the local ruler. Arato-jo on the other hand was designed so most of its structures aren’t visible from below – it was strictly for defensive purposes. Originally built in the 1500’s, Arato-jo was reconstructed in the 1990’s based on research by a local professor. It provides a spectacular overhead view of Togura-Kamiyamada and of the Chikuma River valley below, and you will get a sense of what samurai life used to be like.

Arato-jo is about a 25 minute walk from this intersection. On the way up you will pass Kanon-ji, the large red-roofed building visible from practically all of the onsen town. It is a branch of the venerable Zenkoji Temple in Nagano City. The temple is lit up at night, along with the kanji characters on the mountain spelling out the name of the town, Hollywood-style. Next to Kanon-ji is a tiny shrine called Okutsu Jinja. It is for couples who are hoping to have a baby, and houses two, err, objects. Those two, err, objects are brought down and paraded around town during the summer festival. Otherwise the two fertility symbols can be seen in Okutsu Shrine throughout the year.